Part Of: [Breakdown of Will] sequence
Followup To: [An Introduction To Hyperbolic Discounting]

With this model of akrasia in hand, we will proceed to explore: akrasia therapies, tactical countermeasures we employ to combat your “sin nature”.

How do people verbalize their struggle to preserve “perspective from a distance”? Well, excepting cases where their past selves deprive their future selves of freedom (think of Odysseus chaining himself to the ship), more often than not people gesture towards the concept of willpower.

Today we will build an account of what this fuzzy word actually means.

Choice Is Not A Snapshot

Do you remember our cartoon of a hyperbolic discount curve?  Here it is again:

Recall that the orange curge is LL (the larger-later reward), and the green in SS (the smaller-sooner reward). Akrasia occurs when some temptation transiently overpowers the choice we would otherwise select (when SS > LL).

Now this picture is, of course, extremely narrow.  We haven’t discussed:

I hope to get to these questions eventually. Today, I’d like to introduce just one “complication” into our cartoon: in real life, an organism must confront many choices across its lifespan.

Imagine your author waging an war-with-himself re: whether to stay up late researching, or get a full night’s sleep. Does the above graph comfortably fit in this category of recurrent choice?

One could argue that it fails: there is nothing to stop me from weighing the choices of my one-week-from-now self. To do this, I must represent their utilities in the present. Here’s how we might support such utility anticipation (only three examples shown, to constrain complexity):

Does this anticipation counteract akrasia, instances where LL (larger-later reward) loses to SS (small-sooner reward)? To answer this, simply compare the utility curves: 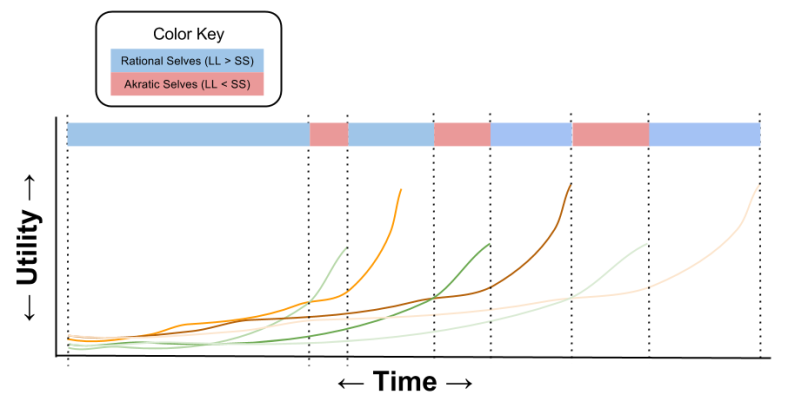 Akratic lapses persist. But if utility anticipation is not the root of willpower, what is?

Our innovation has its roots in philosophy.

Writers since antiquity have recommended that impulses could be controlled by deciding according to principle, that is, deciding in categories containing a number of choices rather than just the choice at hand. Aristtotle said that akrasia is the result of choosing according to “particulars” instead of “universals”. Kant said that the highest kind of decision-making involves making all choices as if they defined universal rules (the “categorical imperative”)… this also echoes the psychologist Lawrence Kohlberg’s sixth and highest principle of moral reasoning, deciding according to principle.

Imagine, for a moment, if we were to sum these utility curves together. Three time-slices should illustrate how this summing works:

Consider the middle time slice (middle rectangle). If you look closely, you’ll see it intersect three orange LL functions and the three green SS functions. If we sum the three LL values together, we arrive at a single (larger) LL value. Same story goes for the three green SS lines. The two circles directly over the rectangle represent these two sums.

In the above illustration, we bundled preferences at three particular times. But what is to stop us from doing the same computation at all times? Nothing, and after we do this, we obtain new utility lines. These lines represent the bundled utility curves of all three choices.

(Why don’t we continue this addition for the entire displayed x-axis? Well, to preserve the effect, after Choice1 expires, you have to take into account Choice4, etc etc…)

Casting these bundled utility curves back to the language of successive selves: 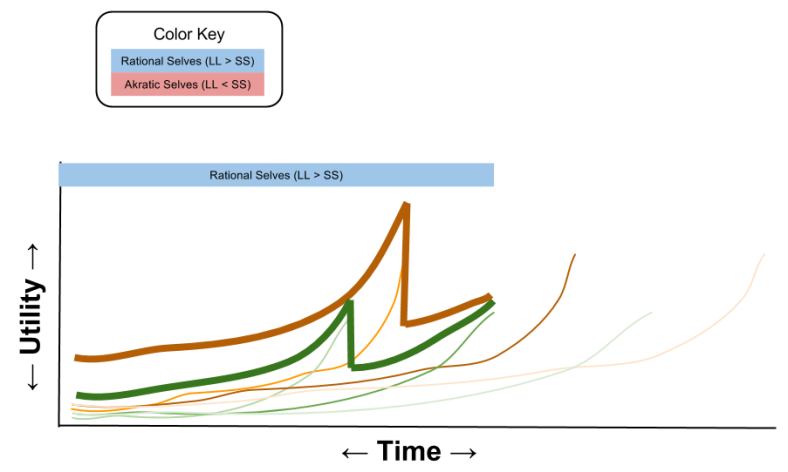 In this situation, then, we see the defeat of akrasia – the victory of willpower!

Next Up: [Personal Rule Feedback Loops]