A function can be conceived as a machine that converts input into output. For example:

Something cool noticed by geometers of long ago:

If I feed the above function ALL POSSIBLE NUMBERS, I get a line!

We can also view functions as maps, taking an input value & returning its corresponding output item.

How might we classify different functions? One obvious thing to do is to count the number of edges entering or leaving a node:

The definition of function is such that every input element maps to one and only one output element.  (This is why vertical lines are difficult to achieve in geometry). So the domain counts are relatively predictable.

Suppose we want a way to refer to function maps that produce no popular outputs, whose codomain elements have at most one element. Call such functions injective functions.

Suppose we want a way to refer to function maps with no unpopular outputs, whose codomain elements have at least one element. Call such functions surjective functions.

If neither popular nor unpopular outputs exist — if all outputs are “normal” 🙂 — we may call such functions bijective functions.

The above example is neither injective nor surjective: 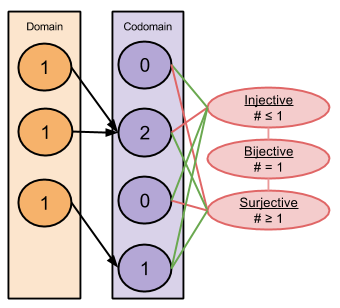 Examples of all four outcomes:

Take a minute to convince yourself that you cannot. Do you see why there will always be at least one popular output?

The argument you must use to convince yourself of the above is an analogue to the pigeonhole principle.

More generally, we find that:

You can also use the above properties to “work backwards”: for example, if two sets provide at least one bijection, their relative sizes (cardinalities) must be equal.

When in doubt, zoom out! Time to fall in love with category theory. 🙂

Functions that are grounded in set theory. But other types of structure-preserving maps have been studied:

Injection/Surjection/Bijection were named in the context of functions. Wouldn’t it be nice to have names any morphism that satisfies such properties? Well, you’re in luck!

Recall that bijection (isomorphism) isn’t itself a unique property; rather, it is the union of the other two properties.

It turns out that another interesting property to read out of maps is endomorphism: a map of an algebraic structure to itself. That makes three interesting properties. Let us explore how the sets of homomorphisms (a homomorphism is an general instance of a morphism, kind of like the instantiation of an abstract class in computer science) relate to each other:

Decoding the above figure: