Today, we embark on a (very) brief tour inside your head!

What is a brain? A brain is a collection of 120 billion neurons.

What is a neuron? A neuron is simply a cell. Since you are a eukaryote, all cells in your body – neuron cells, skin cells, etc – have a lot in common, including:

In addition to these shared features, specialized tendrils (dendrites and axons) set neurons apart, giving them their web-like shape. 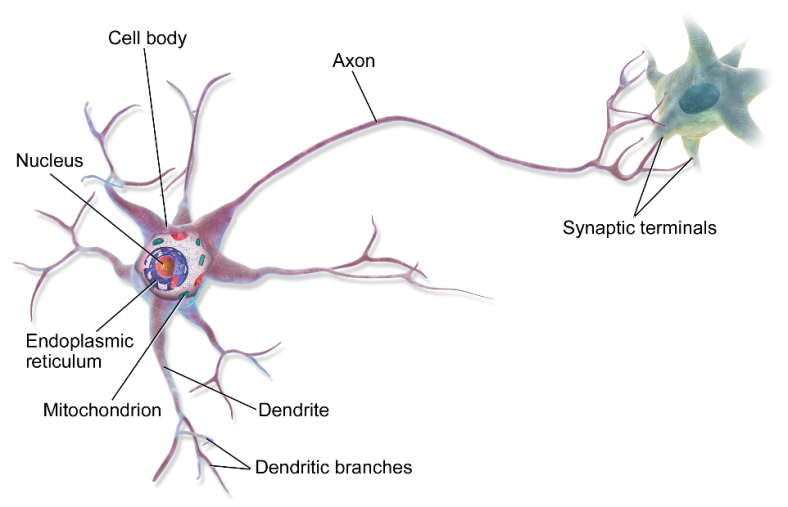 Neurons are useless individually. But when chained together, they may transmit pulses of electrochemical energy known as spike trains. input dendrites receive such signals and – sometimes! – fire, pushing the outgoing signal through the output axon. The output tendrils of a neuron connect with the input tendrils of other neurons; these connections are called synapses.

Let’s zoom out to consider the entire brain. A brain has two symmetric halves (the hemispheres) connected by a bridge (the corpus callosum). Here’s what it looks like from the inside:

Certain parts of the brain are gray, and others are white. Why? What happens when you put these under a microscope?

If white matter doesn’t process information, why is there so much of it?

To answer this question, we turn to the gray matter. Where does it live? In only two places: the wrinkly surface of the brain (the cerebral cortex), and in an evolutionarily ancient part of the brain (the thalamus, and neighboring midbrain structures). Think: spheres within spheres.

We can see now why there is so much white matter. White matter comprises information highways which transport information to and from different areas of the cerebral cortex. Some of these highways directly connect cortical regions, but much travels through the thalamic “central hub”. We will call such highways thalamocortical radiations.

With tractography (a sister technology to the MRI scan), we can now directly visualize such radiations. There is something almost poetic about these highways… you could say that the brain is like a plasma globe.

Next time, we’ll explore some implications of this metaphor.