Consider the sentence “I bought this big book of poems with the red cover”.

In everyday language, we often replace words and phrases with indexing words like “one”. Call this indexing replacement.The meaning of these words can be obtained from the context.

At first glance, indexing replacement seems to target a branch in the syntax tree. For example:

But there are several other substitutions don’t follow from branch replacement:

Perhaps our notion of noun phrases is too flat. Perhaps we need additional nodes to describe structure within the noun phrase. We will call these intermediate nodes N’, (where N → N’ → N’’ = NP):

This new tree successfully predicts all substitution phenomena, by modeling “one” as replacing various “N-bar” nodes:

We can similarly introduce depth to our verb phrases (VPs), by using intermediate V’ (“V-bar”) nodes:

The X-Bar syntax tree provides a simple explanation of the “do so” substitution effects:

A General Theory of Phrases

We can revise our original NP and VP rules to reflect our intermediate N’ and V’ nodes: 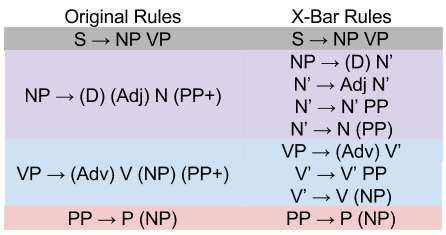 What if noun and verb phrases are instantiations of a more general phrase structure? Just as group theory identifies overlap in the axioms of addition and subtraction, X-bar theory explores the similarity between NP and VP rules.

There are only four kinds of phrase constituents:

Difference #1. Adjuncts can be reordered freely. 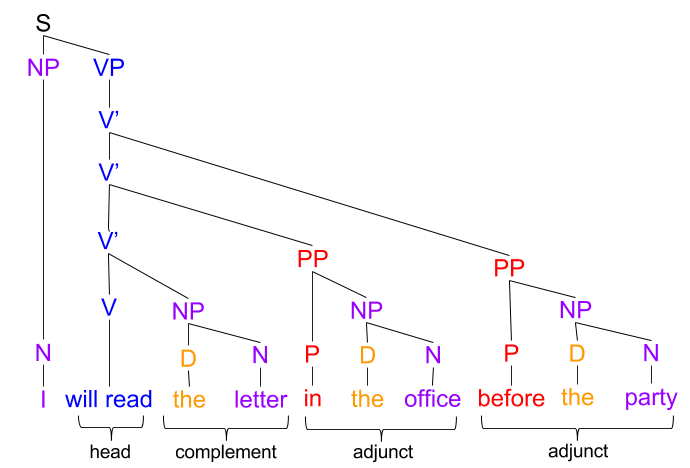 This rule means that our two adjuncts can be shuffled, but the complement NP must retain its original position

Consider another part of speech we have not yet considered: conjunction words like “and” and “or”.

Difference #3. Conjunction words bind adjuncts together, and complements together. But adjunct-complement bindings are non-grammatical. 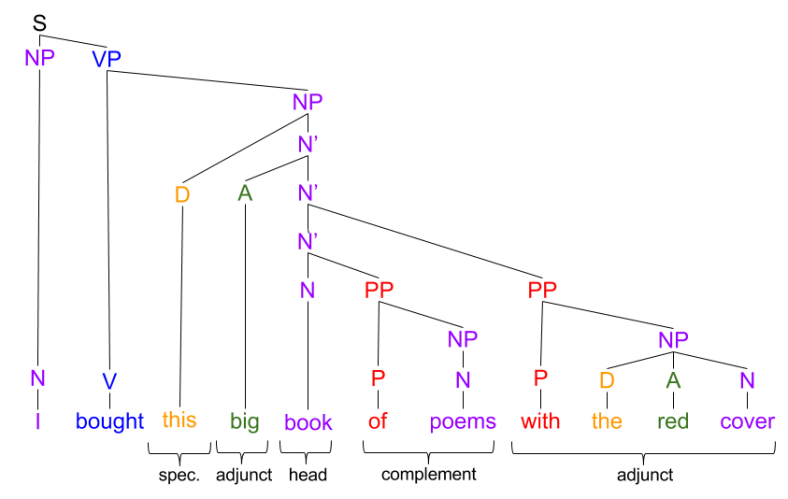 What X-Bar Theory Tells Us About Memory

Earlier, I introduced the distinction between episodic and semantic memory:

Concepts are learned by extracting commonalities from episodic memories. If you see enough metallic blocks moving around on four cylinders, you’ll eventually consolidate these objects into the CAR concept:

In philosophy, I suspect the concepts of necessity and contingency relate to semantic and episodic memory, respectively.

In linguistics, I suspect complements help locate concepts in semantic memory, whereas adjuncts assist episodic localization. In the sentence “I bought the book of poems with the red cover”, the complement helps us activate the concept POEM-BOOK, whereas the adjunct creates sense-predictions that locate it within our episodic memory.

One thought on “The X-Bar Theory of Phrase Structure”