The thalamus receives input from the entire cortex. The cortex & thalamus like two nested spheres, innervating one another. Let us call such cortical-subcortical loops, reentrant loops.

We turn now to the basal ganglia. The basal ganglia is innervated with dopamine, and contains an order of magnitude more dopamine receptors than any other brain region (Dawson et al, 1986). To understand this neurotransmitter, we must consider its biochemical signature.

As a molecule, dopamine contains catechol (a kind of benzene C6H6) and a side-chain amine. Thus, it participates in the catecholamine family.

There are in fact many kinds of catecholamines. For example, from phenethylamine you can synthesize tyrosine (via hydroxylation). In fact, there are thirteen different catecholamines, with a particular tree of biosynthetic sequences:

Thus, catecholamines play a role in metabolic, perceptual, and motor arousal. In short, they are arousal systems.

Within the brain, a small number of discrete cell groups manufacture dopamine:

In the above cell groups, two dopaminergic cell groups are particularly important: A9 (SNc) and A10 (VTA). The nigrostriatal pathway emerges from the former, and the mesolimbic and mesocortical pathways emerge from the latter. 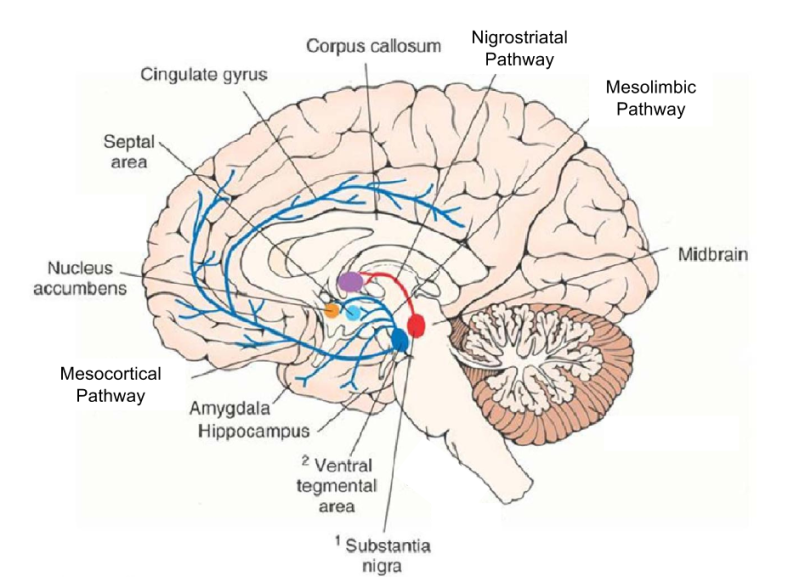 The basal ganglia is an ancient structure, with four main components:

These components comprise the core of the CBTC Loop:

In the above, basal ganglia nodes are in purple. Black arrows are excitatory, red are inhibitory, green are dopaminergic.

Can you find the loop in this circuit? In fact, if you look closely, there are three:

The striatum receives input from the entire cortex. As such, the fibers which comprise the basal ganglia are rather thick. As our tracing technologies matured, anatomists were able to inspect these tracts at higher resolutions. In the 1990s, it was discovered that this “bundle of fibers” actually comprised (at least) three parallel circuits.

These are called the Sensorimotor, Associative, and Limbic loops, based on their respective cortical afferents:

The mesolimbic and nigrostriatal dopaminergic pathways, discussed above, directly map onto the Limbic and Sensorimotor/Associative loops, as follows:

All three circuits (direct, indirect, and hyperdirect) exist in all three loops (Nougaret et al, 2013); however, I omitted hyperdirect from the above for simplicity.

Given its participation in the Limbic Loop, the mesolimbic pathway is also sometimes referred to as the reward pathway. Its component structures, the ventral tegmental area (VTA) and nucleus accumbens (NAc), are particularly important.

Towards A Cybernetic Interpretation

Why these loops, and not others?

The tripartite loops correspond to three different levels of the abstraction hierarchy.

The basal ganglia participates in motivation, decision making, reinforcement learning, and habit formation. If you are interested in basal ganglia function, these will be explored in my Neuroeconomics sequence.