Before 1860, long-distance communication required travel. This made communication across large nations quite challenging. Consider, for example, the continental United States. In 1841, it took four months for the news of the death of President Harrison to reach Los Angeles.

The Pony Express (a mail service built on horsepower) improved wait times to ten days. But it was the telegraph that changed the game. The key idea was to send messages on paper, but rather through voltage spikes in electric cables. Electrical pulses travel at near the speed of light.

It is hard to understate the impact of this technology. These advances greatly promoted information sharing, economic development, and improved governance.

By 1891, thousands of miles of cable had been lain underwater. These pipelines have only become more numerous and powerful over the years. Without them, the Internet would simply be impossible.

Today, we strive to understand the maths of communication.

We start with the basics.

What is communication? The transmission of linguistic information.

What is language? A shared system of reference communicated through symbols.

References (e.g., words) are functions that maps itself to an aspect of the physical world. References can denote both objects and actions.

Consider the power set of symbols (all possible combinations of letters). Words represent a subset of this object (a family of sets over an alphabet).

Symbol recognition is medium independent. For example, a word can be expressed either through writing (graphemes) or spoken language (phonemes). 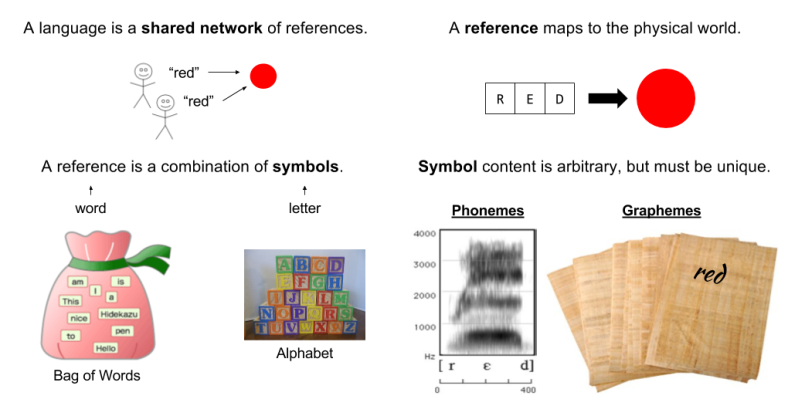 References are the basis of memory. They together build representations of the physical world.

All complex nervous systems construct references. Some animals can communicate (share references). Only humans do so robustly, via syntax.

Semantic interpretations are not restricted to biology. Computers can refer as well. Reference is made possible by symbol grounding.

As the substrate of reference, symbols are the basis of computation. All answerable questions can be solved by a Turing machine.

How to compare languages? Let’s find out!

There are 26 symbols in the English alphabet. How many possible three-letter words are there? The answer is 26^3 = 17,576 possible words. More generally:

Information is the selection of specific words (“red”) from the space of possible words.

We might be tempted to associate information with W. But we desire information to scale linearly with length. Two books should contain twice as much information as one. So we say information is log(M).

Alphabet size (logarithmic base) is not very important in this function. Suppose we choose some other base B instead. We can compare alphabets by converting logarithmic base.

I(X) is known as Shannon information.

We can compare the expressive power of different alphabets. The modern Hawaiian alphabet, for example, has 13 letters. So there are only 13^3 = 2,197 possible three-letter Hawaiian words. The information provided by these respective languages is:

We expect English words to be 27% more information than Hawaiian, on average. And indeed, this is precisely what we find:

How does one translate between languages? Consider the word “red”. In Hawaiian, this word is “ula’ula”. We might construct the following function:

But this fails to generalize. The Hawaiian word for rice is “laiki”, which does not begin with a ‘u’.

In general, for natural languages any function f: AE → AH is impossible. Why? Because words (references) map to physical reality in arbitrary ways. Two natural languages are too semantically constrained to afford a simple alphabet-based translation.

Alphabet-based translations are possible, however, if you use a thin language. Thin languages only refer when converted back into its host language. Binary is a classic example of a thin language. It has the smallest possible alphabet (size two).

An encoding is a function of type f: AE → AH. For an example, consider ASCII. This simple encoding is at the root of most modern technologies (including UTF-8, which you are using to view this webpage):

How can the transmitter protect the message from error? By maximizing the physical differences between symbols. This is the discriminability principle.

This principle explains why binary is employed by computers and telecommunications. A smaller alphabet improves symbol discriminability, which combats the effect of noise.