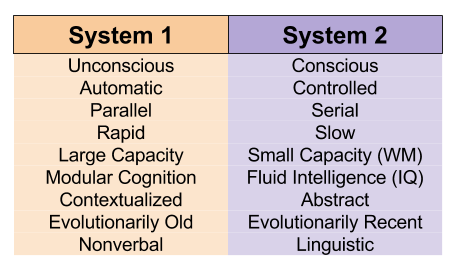 This distinction can be expressed phylogenetically:

But this is incorrect. We know that engine of consciousness is the extended reticular-thalamic activating system (ERTAS), which implements feature integration by phase binding.  Mammalian brains contain this device. Also, behavioral evidence indicate that non-human animals possess working memory and fluid intelligence[C13].

Conscious, non-linguistic animals exist. We need a phylogeny that accepts this fact.

This allows us to conceive of conscious, non-verbal mammals:

This lets us refresh our view of property dissociations:

Most dual-process theorizing (for example, our theory of moral cognition) maps neatly to the autonomous and linguistic mind, respectively.

But the Tripartite Mind theory cannot bear the weight of all behavioral phenomena. For that, we need the more robust language of two loops. In fact, we can marry these two theories as follows:

This diagram reflects the following facts:

Boundaries on the Linguistic Mind

The Linguistic Mind creates cultural knowledge. It is the technology underlying the invention of agriculture, calculus, and computational neuroscience. It is hard to see how such a device could be not only biased, but in some respects completely blind.

But the Linguistic Mind does not have access to raw sensorimotor signals. It only has access to the intricately curated working memory. You cannot communicate mental experiences outside of working memory. You can try, but that would be confabulation (unintentional dishonesty). As [NW77] describe in their seminal paper Telling more than we can know, in practice, human beings are strangers to themselves.

The evidence suggests that working memory does not contain any information about your judgments and decision making. All attempts to describe this aspect of our inner life fail. Introspection on these matters cannot secure direct access to the truth of the matter. Rather, we guess at our own motives, using the exact same machinery we use to interpret the behavior of other people. For more on the Interpretive Sensory Access theory of introspection [C10], I recommend this lecture.

Sociality and the Linguistic Mind

Per the Social Brain Hypothesis [D09], humans are not more intelligent than other primates; we are rather more social. In other words, the Linguistic Mind is a social invention, which facilitates the construction of cultural institutions which allow propriety frames to be synchronized more explicitly.

On the argumentative theory of reasoning, social reasoning is not independent of language. It is the purpose of language.

While the Linguistic Mind evolved to satisfy social selection pressures, not all primate sociality is linked to this device. Social mechanisms have arrived in stages:

All of these mechanisms can be attributed to the Autonomous Mind. But since the Linguistic Mind is driven by our motivation apparatus (just like everything else in the brain), its behavior is sensitive to the wishes of these “lower” modules. This doesn’t contradict our earlier assumption that its content is divorced from Autonomous data.