Is the Hebrew Bible monotheistic?

We might be tempted to say yes after reading Isaiah 44:6 “I am the first and I am the last; besides me there is no God”.

But the situation is more complicated. The Hebrew Bible is also replete with polytheism. A few examples:

We also see middle ground staked out between these two positions. For example, the original audience of the book of Deuteronomy is often exhorted not to follow after other gods, without it ever being asserted that these gods did not exist or were not real. This is known as monolatrism (“single worship”).

Last time, we showed how Yahweh was originally a god of metallurgy in northwest Saudi Arabia. Today, we will work with the framework that Yahweh was introduced to Israel in a five-stage process:

Why did Yahweh worship progress along this trajectory? As we shall explore next time, as with the theocracies of surrounding nations, changes in the religious landscape have strong, robust correlates in the sociopolitical life.

Today I’d like to focus on a different, simpler topic. We shall turn to archaeology and cultural anthropology to explore expressions of polytheism within the Hebrew Bible. Many of my readers already know that the text acknowledges (polemicizes against) polytheistic practices. Less well-known are examples of celebration (bald assertions of polytheistic beliefs) and assimilation (Yahweh “adopts” the roles and characteristics of rival deities).

Let’s review the deities in El’s pantheon, and their appearance in the Hebrew Bible.

For many modern readers, polytheism is a term loaded with negative connotation. Partisans use it as a weapon. Attackers point to continuities between Israelite religion & polytheism, and defenders point to instances where Israelite rhetoric polemicizes against polytheism. But all ideological innovations have both features.

More to the point, those who spend time interacting with polytheism understands how earnestly it grapples with the same aspects of the human condition as other strands of religious expression. Polytheism must be encountered on its own terms. To weaponize is to misunderstand.

The important thing to bear in mind in the following, is that underneath the images and icons of religious expression lie a particular group of people, responding to social and political pressures in thoroughly understandable ways. My experience has been, the more time you spend in someone else’s culture, the easier it becomes to empathize with their plight. 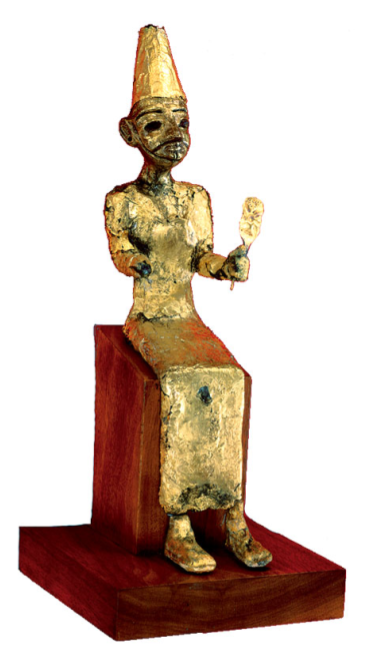 At some point in its history, El was identified with Yahweh as the same god.

This equation is expressed clearly in Exodus 6:2-3. “And God said to Moses, “I am Yahweh. I appeared to the patriarchs as El, but by my name Yahweh I did not make myself known to them.” Other Biblical material asserts this equation. Joshua 22:22 states “the god of gods is Yahweh”. Judges 9:46 refers to “El of the covenant”.

The Yahweh-alone movement vigorously condemn prominent Canaanite gods… except El. There are zero condemnations of El in the Hebrew Bible. This makes sense if Yahweh was ultimately identified with this Canaanite creator-god. What’s more, archaeological evidence suggests that the Yahweh religious centers in Shiloh and Bethel were originally a place of El worship.

El and Yahweh are attributed same characteristics. El is depicted as a wise old man with a beard eg “You are great, O El, and your hoary beard instructs you”. Yahweh is described in the same terms (Daniel 7:9, Job 36:26, Habakkuk 3:6). Like “Kind El, the Compassionate”, Yahweh is a “merciful and gracious god”. The description of Yahweh’s dwelling place as a tent (Psalms 15:1, 27:6, 91:10) recalls the tent of El in the Canaanite narrative of Elkunirsa. Finally, both Yahweh and El are said to dwell amidst cosmic waters (Isaiah 33:20-22, Ezekiel 47:1-12, Zechariah 14:8).

Worship of Baal can be dated back to the foundation of Israelite societies. This can be seen in onamatology, the study of proper names. Names in the Ancient Near East tend to have a theophoric component: usually a suffix that honors a deity. Yahwistic names include Josiah, Jehu (note the “J” sound); Baal-oriented names include e.g., “Zerubabbel”. In addition to hundreds of icons devoted to Baal worship, we also see Ba’al theophoric names as common in the Levant in this time period.

Yahwistic prophets of this period reserve the most vitriol for Baal worship. Why? Because the Omride dynasty (including King Ahab & Jezebel) erected a temple to Ba’al. While the cult of Yahweh continued in the northern kingdom, Baal was perhaps elevated as the patron god of the northern monarchy, thus creating some sort of theopolitical unity between the kingdom of the north and the city of Tyre.

Indeed, there is some evidence that the cult of Baal and Yahweh got conflated in the north. Hosea 2:16-24 suggest that some northern Israelites did not distinguish between Yahweh and Baal. The religious sanctuaries in the Israelite cities of Dan and Bethel centered around golden calves; this iconography strongly parallels that of Baal. Finally, the redundancy in 1 Kings 16:32 was almost certainly a scribe glossing over the original text, “altar for Baal in temple of Yahweh”.

To induce the Israelites to stop worshipping Baal, the imagery of Baal was adopted by the Yahweh cult. The Baal Cycle, ancient mythology on the scale of the Epic of Gilgameth, has four literary themes for the storm god. Here are those themes, along with the Biblical text which mirrors them.

El’s wife was named Asherah. When Yahweh was identified with El, did he also inherit his wife? In the blessings of Joseph, Genesis 49:25 contains language specific to the Asherah cult “blessings from Breast-and-Womb”. The Bible further admits that the Israelites frequently worshipped a “Queen of Heaven” (Jeremiah 7:18, 44:17-25). Indeed, 2 Kings 21:7 tells us that worship of Asherah happened within the Temple itself. Finally, archaeology has uncovered several icons with the inscription “Yahweh and his Asherah”. This evidence cumulatively suggests that, in early forms of Israelite religion Yahweh was believed to have a wife.

The push towards monolatrism led to the eviction of the Asherah cult, whose memory may be preserved in Zechariah 5:5-11. But this eviction created a deficit of femininity to Israelite religious expression. To compensate, the Biblical writers began attributing feminine attributes to Yahweh (Isaiah 49:15, 46:3, 44:2,24, 42:14). Asherah-like characteristics also appear in the goddess of Wisdom in Proverbs 8.

There is extensive evidence for worship of an astral deity (sun god) in Jerusalem.  And Jerusalem is presumably the site that Yahweh was identifed with El. Since the Ugaritic texts hint that El’s family was astral in character, it is not unthinkable that Yahweh was viewed similarly.

The Ugaritic texts mention hundreds of Canaanite gods. The Bible only criticizes two of them: Ba’al and Asherah. What gives?

The Biblical authors conflates Asherah and Astarte, and conflates multiple male god as “the Baals”.  Despite this, there is only evidence of ~10 gods worshipped in early Israel. This is also true amongst Israel’s neighbors. It appears that the religious landscape of Iron Age Canaan was simply less diverse than Bronze Age Ugarit.

Do we see evidence for these gods in the Bible, despite their not being named in that text?

Anat. Known for her savagery, Anat worship involves a celebration of gore. “Knee-deep she gleans in warrior blood, neck-deep in the gore of soldiers, until she [Anat] is sated with fighting.”  While no evidence of Anat-worship exists in ancient Israel, these divine themes have strong parallels in the Biblical text. The Bible describes heaps of copses, drinking blood, devouring flesh, and swords dripping with viscera.

Astarte. In the Bible, the Name of Yahweh is described in personal terms. The divine name acts as a warrior (Isaiah 30:27) and possesses martial qualities such as radiance and strength (Psalm 29:1-2). The warrior goddess Astarte bears the title “name of Baal”. This designation of Astarte and her martial character and special relationship to the god Baal approximate the martial character of the name, and its special relationship to Yahweh as warrior god. Further evidence for this hypothesis has been adduced from the Elephantine papyri.

Similar lines of argument can be made for entities like Light and Truth of Psalm 43:3.

Angels. The lowest tier of the Israelite pantheon also went through alterations. As the Ugaritic texts show, the lowest tier involved a number of deities who served in menial capacities. A common task for such gods was to act as messenger, the literal meaning of the English word “angel”. Certainly angels are not regarded in later traditions as gods. But they were in early traditions.

This post provides evidence for a simple point. Polytheistic expression (not just condemnation!) occurs in the Hebrew Bible.

These expressions are best explained by the Yahweh cult shifting away from its traditional pagan roots, and towards a monolatrist (worship one god) and later monotheist (acknowledge one god) understandings.

As we will see next time, the reasons why Yahweh worship proceeded in this interesting (but not original) trajectory, are fairly easy to understand.