In Knowledge: An Empirical Sketch, I left you with the following image of perceptual tunneling: 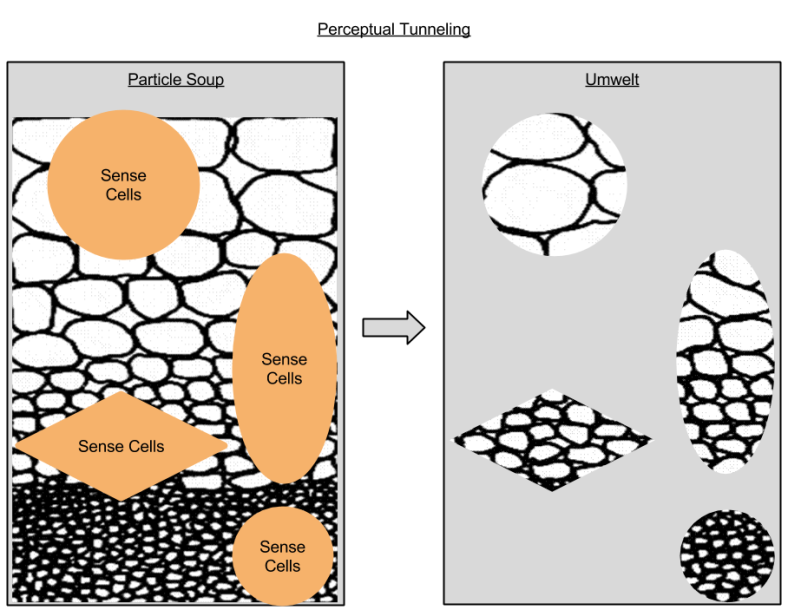 Today, we will explore this idea in more depth.

Recall what you know about the nature of light:

Since h and c are just constants, the relation becomes very simple: energy is inversely proportional to wavelength. Rather than identifying a photon by its energy, then, let’s identify it by its wavelength. We will do this because wavelength is easier to measure (in my language, we have selected a measurement-affine independent variable).

So we can describe one photon by its wavelength. How about billions? In such a case, it would be useful to draw a map, on which we can locate photon distributions. Such a photon map is called an electromagnetic spectrum.

With this background knowledge in place, we can explore a photon map of solar radiation: what types of photons strike the Earth from the Sun? 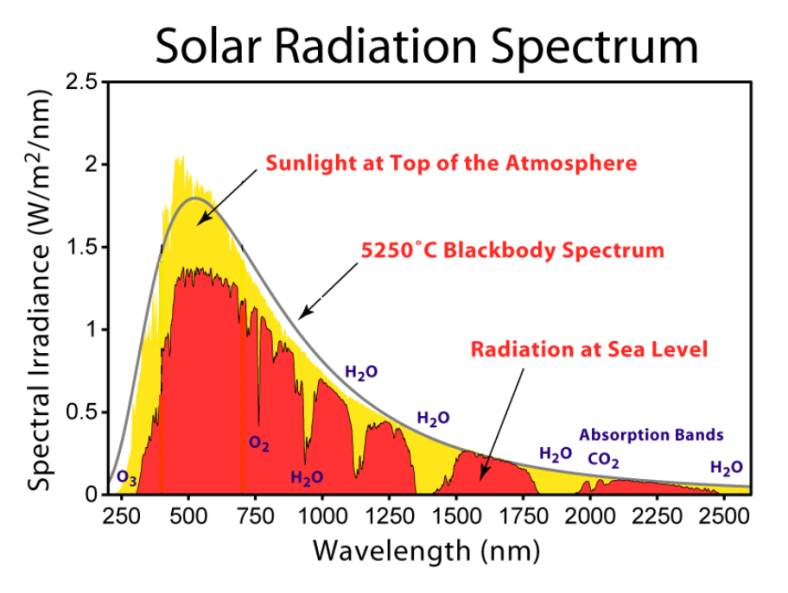 This image is rather information-dense. Let’s break it down.

Compare the black curve to the yellow distribution. The former represents the difference between an idealized energy radiator (a black body), whereas the latter represents the actual transmission characteristics of the sun. As you can see, while the black body abstraction does not perfectly model the idiosyncrasies of our Sun, it does a pretty good job “summarizing” the energy output of our star.

Next, compare the yellow distribution to the red distribution. The former represents solar radiation before it hits our atmosphere, the latter represents solar radiation after it hits our atmosphere (when it strikes the Earth). As you can see, at some wavelengths light passes through the atmosphere easily (red ~= yellow; call this atmospheric lucidity) whereas at other wavelengths, the atmosphere absorbs most of the photons (red << yellow; call this atmospheric opacity).

These different responses to different energy light does not occur at random, of course. Rather, the chemical composition of the atmosphere causes atmospheric opacity. Ever hear the meme “the ozone layer protects us from UV light”? Well, here is that data underlying the meme (see the “O3” marker at the 300 nm mark?). Other, more powerful but less well-known, effects can be seen in the above spectrum, which characterize the shielding effects of water vapor, carbon dioxide, and oxygen onto the spectra.

Your eyes house two types of photoreceptive cell: the rod and the cone.

Rods are tuned towards performing well in low-light conditions. After roughly 30 minutes in the dark, everything is ready for optical stimulation. In this “dark-adapted” state, the visual system is amazingly sensitive. A single photon of light can cause a rod to trigger. You will see a flash of light if as few as seven rods absorb photons at one time.

Cones, on the other hand, excel in daylight. They also underwrite the experience of color (a phenomenon we will discuss next time).  Now, unless you are a tetrachromat mutant, your eyes contain three kinds of cone:

Below are the absorption spectra.  Please note that, while not shown, rods manifest a similar spectrum: they reside between the blue and green curves , with a peak receptivity is 498 nm. 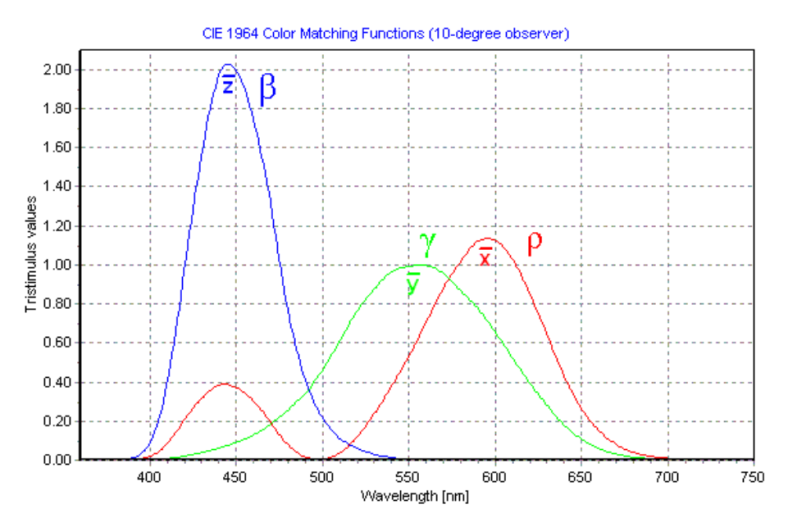 It is important to take the above in context of the cone’s broader function. By virtue of phototransductive chemical processes, sense organs like the cone accept photons matching the above spectrum as input, and thereby facilitate the production of spike trains (neural code) as system output.

We now possess two spectra: one for solar radiation, and one for photoreceptor response profile. Time to combine spectra!  After resizing the images to achieve scale consistency, we arrive at the following:

Peak solar radiation corresponds to cone spectrum! Why should this be? Well, recall the purpose of vision in the first place. Vision is an evolutionary adaptation that extracts information from the environment & makes it available to the nervous system of its host. If most photon-mediated information is happening at the 450-700 nm energy level, should we really be so surprised to learn that our eyes have adapted to this particular range?

Notice that we drew two dotted lines around the intersection boundaries. We have now earned the right to use a name. Let us name photons that reside within the above interval, visible light. Then,

We have thus stumbled on the definition of visibility. Visibility is not an intrinsic physical property, like charge. Rather, it is human invention: the boundary at which our idiosyncratic photoreceptors carve into the larger particle soup.

We have now familiarized ourselves with the mechanism of tunneling. Perceptual tunneling occurs when sense organ transduces some slice of the particle soup of reality. In vision, photoreceptors cells transduce photons within the 450-700 nm energy band into the neural code.

With this precise understanding of transduction, we begin to develop a sense of radical contingency. For example,

I began this post with a partial quote from Metzinger. Here is the complete quote:

The evening sky is colorless. The world is not inhabited by colored objects at all. It is just as your physics teacher in high school told you: Out there, in front of your eyes, there is just an ocean of electromagnetic radiation, a wild and raging mixture of different wavelengths. Most of them are invisible to you and can never become part of your conscious model of reality. What is really happening is that your brain is drilling a tunnel through this inconceivably rich physical environment and in the process painting the tunnel walls in various shades of color. Phenomenal color. Appearance.

Next time, we’ll explore the other half of Metzinger’s quote: “painting the tunnel walls in various shades of color, phenomenal color”…