! Is there a different operation that would produce closure?

Modular arithmetic is the mathematics of clocks. Clocks “loop around” after 12 hours. We can use modulo-4 arithmetic, or

To check for closure, we need to add all pairs of numbers together, and verify that each sum has not left the original set. This is possible with the help of a Cayley table. You may remember these as elementary school multiplication tables 😛 .

By inspecting this table, we can classify

is an abelian group.

An Example Using Roots of Unity

Definition 1. A group is said to be order

if its underlying set has cardinality

is order 4. What other order-4 structures exist?

. Its solutions, or roots, is the set

. This set is called the fourth roots of unity.

So what is the Cayley table of this set under multiplication

? In the following table, recall that

Something funny is going on. This table (and its colors) are patterned identically to

! Recall that a binary operation is just a function

. Let’s compare the function maps of our two groups:

These two groups for structurally identical: two sides of the same coin. In other words, they are isomorphic, we write

. Let us call this single structure

But why are these examples of modular arithmetic and complex numbers equivalent?

One answer involves an appeal to rotational symmetry. Modular arithmetic is the mathematics of clocks: the hands of the clock rotating around in a circle. Likewise, if the reals are a number line, complex numbers are most naturally viewed as rotation on a number plane.

This rotation interpretation is not an accident. It helps use more easily spot other instances of

. Consider, for instance, the following shape.

On this shape, the group of rotations that produce symmetry is

. Inspection reveals that this, too, is isomorphic to

Towards The Presentation Formalism

as a cyclic group, for reasons that will become clear later.

Theorem 2. For every cyclic group

, there exists some generator

in its underlying set such that every other set element can be constructed by that generator.

Definition 3. When a generator has been identified, we can express a group’s underlying set with generator-dependent names. Two notation are commonly used in practice: 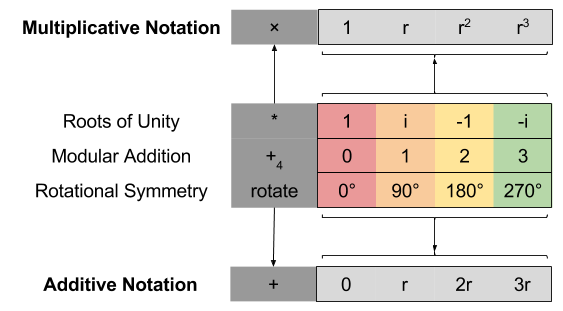 These two notation styles are interchangeable, and a matter of taste. In my experience, most mathematicians prefer multiplicative notation.

What generators exist in

? Let’s look at our three instantiations of this group:

For now, let’s rename all elements of

Okay. But why is

not a generator in

Theorem 4. For finite groups of order

, each generator must be coprime to

. That is, their greatest common divisor

We just spent a lot of words discussing generators. But why do they matter?

Generators are useful because they allow us to discover the “essence” of a group. For example, the Rubik’s cube has

configurations. It would take a long time just writing down such a group. But it has only six generators (one for a

rotation along each of its faces) which makes its presentation extremely simple.

Another way to think about it is, finding generators is a little bit like identifying a basis in linear algebra.

) for the sake of concision.

Definition 6. A Cayley diagram is used to visualize the structure specified by the presentation.  Arrow color represents the generator being followed.

Note that Cayley diagrams can be invariant to your particular choice of generator:

The shape of the Cayley diagram explains why

is called a cyclic group, by the way!

With these tools in hand, let’s turn to more complex group structures.

. Let us consider the “triangle group”

, generated by a clockwise

and a horizontal flip

With triangles, we know that three rotations returns to the identity

. Is there some combination of rotations and flips that are equivalent to one another? Yes. Consider the following equality:

Analogously, it is also true that

Definition 7. Some collection of elements is a generating set if combinations amongst only those elements recreates the entire group.

Cyclic groups distinguish themselves by having only one element in their generating set. Dihedral groups require two generators.

We can write each dihedral group element based on how it was constructed by the generators:

Alternatively, we can instead just write the presentation of the group:

We can visualize this presentation directly, or as a more abstract Cayley graph: 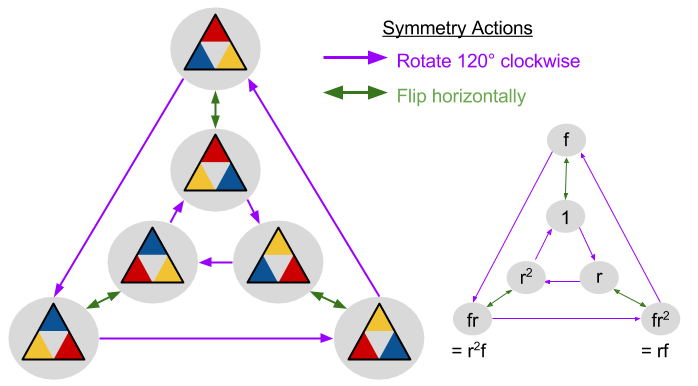 The Cayley table for this dihedral group is: 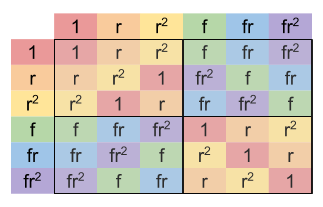 is not abelian: its multiplication table is not symmetric about the diagonal.

By looking at the color groupings, one might suspect it is possible to summarize this

table. We will explore this intuition further, when we discuss quotients.

One thought on “An Introduction to Geometric Group Theory”