Who Wrote The Hebrew Bible?

A close reading of the Hebrew Bible reveals the existence of doublets: two stories that describe the same event. A few examples:

Dozens of these doublets appear throughout the first five books of the Hebrew Bible (also known as the Torah). Traditionally, the Torah is thought to have a single author, and doublets like these were explained as either a) different events, or b) same event but with different emphases.

But what if these doublets exist because the Torah has multiple authors?

In principle, how might we discern between a single- and a multi-author book?

The Clustering Method. Let’s conjecture two sources (clusters) and, for each sentence, assign it either Cluster 1 or Cluster 2. We have complete freedom in our assignments. We want to chose clusters that maximize the coherence within each source, and also maximize the difference between the sources.

For readers familiar with machine learning: this is unsupervised learning – searching for latent variables that best explain our data.

A Tale of Two Books

Suppose you encounter a book you have never read before, originally written in English by a single author. Call this Book A.

But you don’t know if Book A has one or two authors! To find out, you might use the Clustering Method.

What happens if you look at every sentence in Book A, and try to make each source-cluster as different as possible. Even for books written by a single author, the resultant source-clusters could be contrived to be truly different. For example, you could put all optimistic sentences in one bucket, and all pessimistic sentences in the other. But even though the texts feel a little different, they don’t differ that much (after all, a single person wrote both!)

In contrast, imagine you come across another book, Book B, replete with doublets. You break those doublets into clusters, and discover the following facts:

On this evidence, it seems very unlikely that there is a single author of Book B. Instead, most people would indeed accept that this document has two different authors.

The Hebrew Bible is like Book B. Only, instead of two distinct authors, we have identified five. These are the Jahwist source (J), the Elohim source (E), the  Priestly source (P), the Deuteronomist source (D), and the Redactor (R). This is the Documentary Hypothesis.

We will explore the different personalities of these authors in more detail next section; for now, I want to briefly describe their contributions to the Torah from a textual perspective: 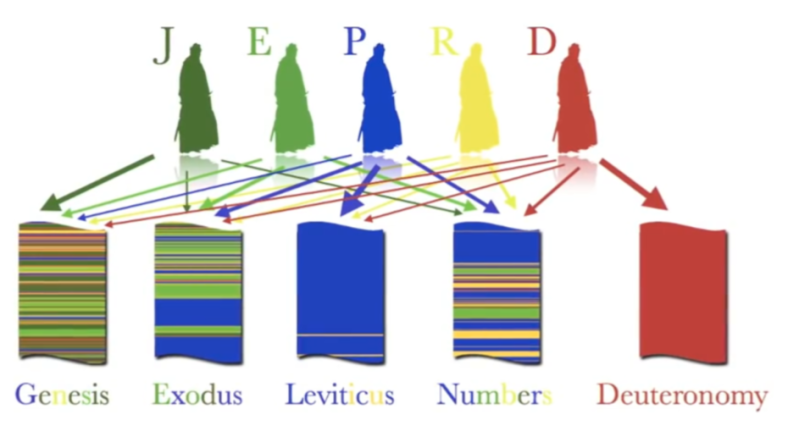 And here is the timeline on which our source documents were authored, where the final redactor R (Ezra) compiled the final JEPD product. 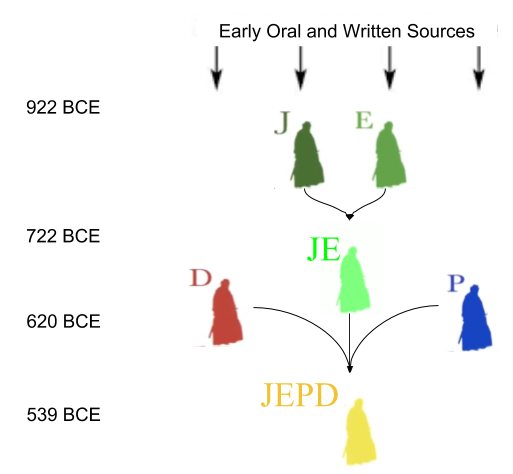 Evidence For The Hypothesis

How do we know all of this? On the following grounds:

Above all, the strongest evidence establishing the Documentary Hypothesis is that several different lines of evidence converge. There are more than thirty cases of doublets: stories or laws that are repeated in the Torah. The existence of so many overlapping texts is noteworthy itself. But their mere existence is not the strongest argument. One could respond, after all, that this is just a matter of style of narrative strategy. Similarly, there are hundreds of apparent contradictions in the text, but one could respond that we can taken them one by one and find some explanation for each contradiction. And, similarly, there is a matter of the texts that consistently call the deity God while other texts consistently call God by the name YHWH, to which one could respond that this is simply like calling someone sometimes by his name and sometimes by his title.

The name of God and doublets were the were the starting-points of the investigation into the formation of the Bible. But they are not major arguments or evidence in themselves. The most compelling argument is that all this evidence of so many kinds comes together so consistently. To this day, no one known to me who challenged the hypothesis has ever addressed this fact.

Most scholars agree with the broad picture of four sources (J, E, P, D) and two redactions (JE and JEPD). There does exist considerable controversy at finer levels of detail. The four most contentious mini-debates I know of are as follows:

I was raised in an evangelical household, which means that growing up, I have read the Hebrew Bible (known to Christians as the Old Testament) cover-to-cover several times. I found such reading difficult. Some of this was mere cultural distance: a kid in the 20th century CE is three millenia removed from Canaanite culture in which the Bible was written.

But for me, the Hebrew Bible feels much easier to understand in light of the Documentary Hypothesis.

I wish more people knew about the Documentary Hypothesis for these reasons. Or better yet, could look at the labelled sources of the Hebrew Bible online. But for now, if you’d like to read the Hebrew Bible yourself, with labelled sources, the best way to do this is simply to purchase a book like, The Bible With Sources Revealed for a copy of the complete Torah, color coded by authorship.

2 thoughts on “The Documentary Hypothesis”