Senses: Foolish intellect! Do you seek to overthrow us, while it is from us that you take your evidence?

This two-line dialogue, coined in 400 BCE by Democritus, haunts our species to this day. How might we build an inference trail from our subjective experiences to objective physics? can we build an account of how to move from pure phenomenology to scientific realism? And once we arrive at scientific realism, can that say anything substantial about phenomenology, without casting doubt on its own veracity?

How might we cast the above (crude) intuition of an epistemological loop into mathematics? Could we then learn to generalize the loop in non-trivial ways? How might we defend our construction of physics against vicious circularity, against constraint poverty?

Such questions are the nightmare of epistemology, the reason why no one has yet fully answered solipsism. And yet, in my view, analytic philosophy has stalled far beyond current state of the art. How often do epistemologists discuss the merits of psychophysics? Don’t you think they should? The cognitive redemption of epistemology is happening in our lifetimes.

Most of my attention in mental architecture involves sewing together different levels of analysis (vertical integrative theorizing). But it is important to note the domain of such intertheoretic reductions. While my vertical work in mental architecture will address the concerns of the agent, environmental analyses are just as important. Only with a more universal physics, a physics not bound to the limited concerns of Earth’s biota, that we can hope to achieve a more productive degree of abstraction. 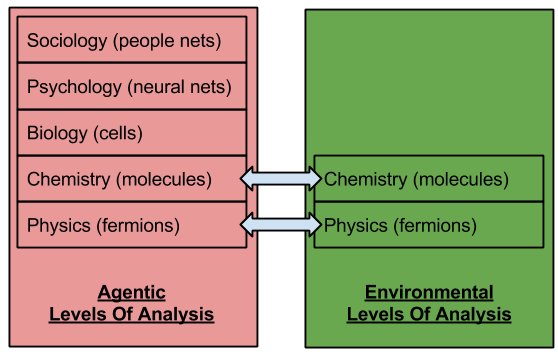