Propriety frames are a memory format that retains social intuitions. This form of memory permits normative judgments, or which behaviors are appropriate or inappropriate.

Propriety frames are organized by situational context. A Restaurant frame provides the social intuitions for restaurant interactions. Frames are the substrate of rituals.

Frames are organized hierarchically to promote reuse. For example, the Eating frame is relevant in contexts besides restaurant dining.

When a mother instructs her son to not yell in the store, the child installs an update to his Shopping frame. When a family exchanges gossip around a campfire, they are doing so in part to synchronize their propriety frames.

As outlined in Moral Foundations theory, there are six such generators: authority, care, loyalty, fairness, autonomy, and sanctity.

People are genetically and environmentally disposed to respond to certain generators more strongly than others. Let social matrices be the emotional intensities elicited by each generator.

People with similar matrices tend to gravitate towards similar political parties. When you measure the social matrices of American citizens, you can see large differences between the social intuitions of Democrats and Republicans. 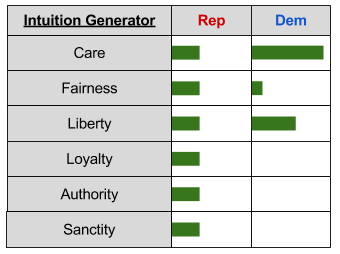 These differences in social matrices explain much of American politics.

Generators are located subcortically, and thus produce intuitions quickly and automatically. Frames are stored in the cortical mantle, and are thus slower, and more amenable to conscious awareness.

As the work of Joshua Greene shows, deontological (rule-based) attitudes are generated rapidly; whereas consequential theories of morality are slower and more vulnerable to distraction. This suggests a relatively straightforward mapping:

Frames and Generators can influence one another, albeit slowly. Moral argumentation can change one’s mind, and these frame updates can percolate down to change one’s social matrices (intuition weights). Call this frame internalization.

Similarly, if one’s private intuitions diverge from a culturally inherited norm, that frame can be updated to be more consistent with one’s personality. Call this frame refinement.

Language made regime accretion possible. No longer is expertise confined to the skull of the individual. No longer is death a Full Restart button. Our species sends cultural expertise down through the generations.  This knowledge – these frames – have become increasingly sophisticated over the course of human history.

Hominid evolution has also seen the advent of regime diversification. Modern religions (of the Axial Age) were successful because they improved on our ability to trust strangers. This in turn dramatically increased the size of feasible social groups.

We have so far only been speaking about social attitudes (should / should not). What about moral attitudes (good / evil)?

Moral attitudes are nothing more than a kind of social attitude. I know of no moral attitude that can be divorced from a social context.

Moral attitudes are constructed by moral tagging, which endows a subset of social attitudes with anger and disgust reactions (as opposed to the more typical reputation appraisal, gossiping, shaming).

Further, moral tagging produces appraisal inflexibility. Moral violations are viewed as wrong everywhere, in every context. This is in contrast to other social violations, for which it is easier to see circumstances in which the behavior would seem less bad. 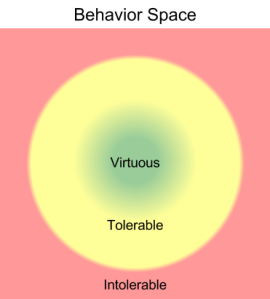 A similar distinction appears amidst disagreement. There are two kinds of ways people’s judgments can diverge:

For more information, see Tetlock et al (2000). The psychology of the unthinkable: taboo trade-offs, forbidden base rates, and heretical counterfactuals.

The space of possible social intuitions is vast. However, group living only became possible with relatively homogenous norms. How do individual brains synchronize propriety frames and social matrices within a group?