The following discussion was motivated by this excellent book by Daniel Chandler.

Semiotics is the study of signification. Whereas semantics addresses what things mean, semiotics addresses how things mean. I initially became curious about semiotics because of my interests in semantics, in memetics, and in philosophy of language. As it turns out, the field is closer to postmodern intellectual traditions than I am accustomed. I am used to approaching people like Derrida with suspicion; it is high time that I took such theorizing seriously enough to reproduce it.

To get a feel for the semiotician’s theory of sign, let us first examine Saussure’s model: that of the signifier and the signified. 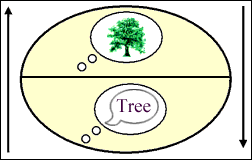 A linguistic sign is not a link between a thing and a name, but between a concept and a sound pattern. The sound pattern is not actually a sound; for a sound is something physical. A sound pattern is the hearer’s psychological impression of a sound, as given to him by the evidence of his senses. This sound pattern may be called a ‘material’ element only in that it is the representation of our sensory impressions. The sound pattern may thus be distinguished from the other element associated with it in a linguistic sign. This other element is generally of a more abstract kind: the concept. (Saussure 1983, 66; Saussure 1974, 66) … Saussure’s original model of the sign ‘brackets the referent’: excluding reference to objects existing in the world. His signified is not to be identified directly with a referent but is a concept in the mind – not a thing but the notion of a thing.

It is almost embarrassingly easy to cast this directly to cognitive science. The signifier is the contents of perception bubbling up from transduced external signals. The signified is the concept bubbling up from long-term memory. Concepts may be fetched through a multitude of signals, and come in exemplar, prototype, and theory packages.

Can we explain why semioticians find it helpful to link signifier and signified? Yes! Within the human nervous system, there exist strong associative bonds between percept and concept: “sign” captures this natural kind.

To my knowledge, the cognitive science of semiotics has yet to find its wings: a vast, unexplored frontier. However, with this psychological reduction of “sign” in hand, we immediately find ourselves in a position to translate even the most arcane theorizing into an empirical framework. Two examples of such translations follow:

Let us first examine a conception of sign that rivals that of Saussure, one authored by American logician C.S. Peirce:

There exist two (approximate) parallelisms between the models of Peirce and Saussure:

Only one leg of the triangle that is wholly novel. “Referent” refers to the category – the substance that concepts point towards.

Let me zoom in on a subtlety of this model: Peirce held that sense (in his language, the interpretant) is itself a sign:

However, the interpretant has a quality unlike that of the signified: it is itself a sign in the mind of the interpreter…. Umberto Eco uses the phrase ‘unlimited semiosis’ to refer to the way in which this could lead (as Peirce was well aware) to a series of successive interpretants (potentially) ad infinitum (ibid., 1.339, 2.303).

So, more triangles may nest within the top of the above triangle! What are we to make of this?

Well, Peirce’s claim is not without intuitive support: it explains conceptual recursion well. For example, I could teach myself that “t” signifies the word “tree”, which signifies the concept of tree (whose referent is a thing that lives in dirt).

While this assertion produces interesting implications, it is not yet particularly falsifiable.
Can we use our cognitive reduction to cast this idea into a prediction? Yes.
If “sense” is a sign, there must exist some mechanism within concept retrieval that would activate subsidiary perceptions.
This is the beginning of a question that a brain scanner could answer.

I was surprised to learn that Freud has influenced the development of semiotics, with his notion of condensation:

Psychoanalytic theory also contributed to the revaluation of the signifier – in Freudian dream theory the sound of the signifier could be regarded as a better guide to its possible signified than any conventional ‘decoding’ might have suggested (Freud 1938, 319). For instance, Freud reported that the dream of a young woman engaged to be married featured flowers – including lilies-of-the-valley and violets. Popular symbolism suggested that the lilies were a symbol of chastity and the woman agreed that she associated them with purity. However, Freud was surprised to discover that she associated the word ‘violet’ phonetically with the English word ‘violate’, suggesting her fear of the violence of ‘defloration’ (another word alluding to flowers) (Freud 1938, 382-3). If this sounds familiar, this particular dream motif featured in the film Final Analysis (1992). As the psychoanalytical theorist Jacques Lacan emphasized (originally in 1957), the Freudian concepts of condensation and displacement illustrate the determination of the signified by the signifier in dreams (Lacan 1977, 159ff). In condensation, several thoughts are condensed into one symbol, whilst in displacement unconscious desire is displaced into an apparently trivial symbol (to avoid dream censorship).

Now, it is important to avoid writing off condensation merely because the story of the young woman does not impress. In his Interpretation of Dreams, Freud produces numerous examples of condensation. Perhaps you, the reader, can bring to mind one of your own dreams to motivate the theory. Have you ever had a dream where you recognized the body of someone, but their face was of somebody else? Have you ever had a dream where an object “felt normal”, but was in important sense blurred? These are the sorts of evidences Freud would point to, as products of condensation.

While this assertion produces interesting implications, it is not yet particularly falsifiable.
Can we use our cognitive reduction to cast this idea into a prediction? Yes.
Condensation theory would predict that the percept-concept binding apparatus can be rearranged during the dream state.
This is the beginning of a question that a brain scanner could answer.

If you were charged with crafting a research programme to understand dreams, how would you proceed? The task is enormous: our ignorance dwarfs our knowledge, our data outpaces our models.

On the other hand, as the sciences move from armchair theorizing towards quantitative models, we see entire traditions abandoned in their wake. Few scientists pay much attention to psychoanalysis, or semiotics, or postmodern theorizing. And this is a shame – how much creativity and insight are locked behind the door of qualitative musings!

While the title of this post is amusingly grandiose, I find something genuinely exciting about the above kind of theorizing. It seems to address both of these pain points.