The Origins Of Social Identity

At twelve months of age, children begin ascribing beliefs and desires to others. If beliefs represent the world, then beliefs-about-beliefs are meta-representational. We may call the former 1-beliefs, and the latter 2-beliefs.

Not all beliefs are about people… but some are! In Awakening To A Social World, we discussed how people-oriented knowledge is stored in relationship models. Specifically, 1-beliefs about significant people in your life are stored in primary models, and 2-beliefs about their impression of you are stored in secondary models.

The social mind can be visualized as follows:

Notice how every person has a color: Clyde, for example, is orange, and Bonnie is purple. Within Bonnie’s mind, her primary models of other people are large ovals, and secondary models are nested inside. Since the large ovals describe other people, they have a variety of colors. Since the nested ovals capture who you are to these people, they are all the same color (in Bonnie’s case, purple). 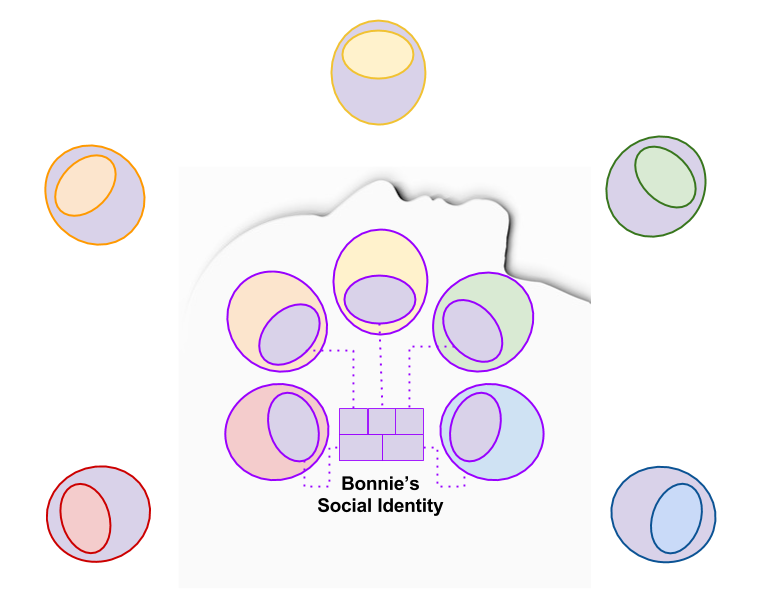 What good is a social identity? Does it exist solely to give your warm fuzzies and/or social anxiety?

No, selfhood is inextricably linked to behavior. While your behavior may diverge from time to time, it is at least strongly guided by your sense of identity. Call this hypothesized connection the self-motivation thesis.

The flow from perception to action (the sensorimotor river) is the single most important service your mind provides. But imagine, if you will, a  child’s relationship to her best friend, which forms a central role in her social identity. If she moves away, that part of her identity is lost. But this is unacceptable: grief is a healthy response to such an event, but damaging your sense of self (and thus, crippling your motivation) is not healthy.

Social uncertainties and change cause dramatic fluctuations within your social identity, but the sensorimotor river requires consistency. Your brain resolves this tension by injecting granite into your soul: by disconnecting social identity from self-concept.

The interplay between the fluctuating identity and the rigid self-concept will be taken up next time, when we discuss self-verification theory.