While EEG excels at providing temporal resolution, it doesn’t provide much spatial information. Where does the brain construct these three modes?

This evidence shows that existential modes are generated by different areas. Specifically:

Neuroscientists now knew where to look! It was not long before they discovered the machinery that create consciousness, sleeping, and dreaming:

We have also explained that the purpose of consciousness is to solve the binding problem: gluing together disparate adjectives into coherent nouns:

Consciousness creates the coherent objects of working memory by implementing phase binding, where object features are stitched together in distinct frequency bands, not unlike the radio in your car.

We have previously described the thalamus and cortex as dually innervating spheres, not dissimilar to a plasma globe: 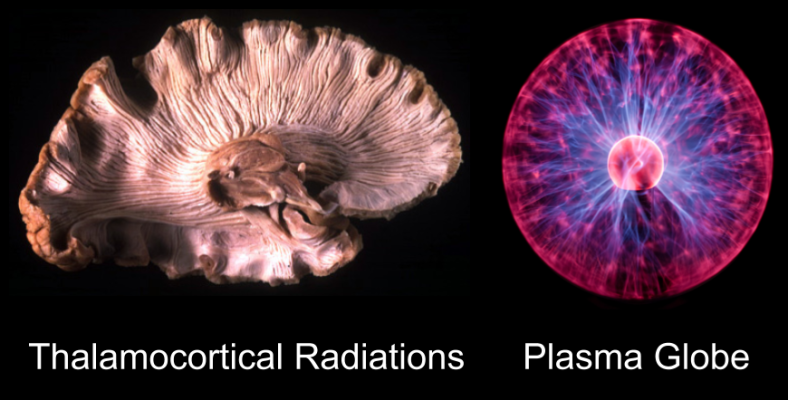 And indeed, the nuclei within the thalamus tile the entire cortex:

These nonspecific nuclei are the principal components of the ERTAS system, and plausible candidates for the engine of consciousness.

These nuclei project to the following three sites:

These structures in turn route information flowing to cortex:

The extended reticular-thalamic activating system (ERTAS) hypothesis connects the ARAS system with the phase binding interpretation of the cortico-thalamo-cortical reentrant loop. One hypothesis, adapted from Newman (1999), has three theses:

More recent research has corroborated the role of the ILN in phase binding, and expanded its scope. Saalmann (2014) notes that the ILN seems to participate in a larger group of higher-order nuclei which each manage information within more constrained parts of cortex. The anterior ILN seems more related to oculomotor processes; the posterior deals with the multimodal integration of different sense data.

One unexpected recent finding has been that lesions of “higher-order nuclei” such as the ILN seem to perturb cortico-cortical information transmission. This underscores the need to understand interactions between the CTC Loop and other reentrant loops.

The Role of The Claustrum

The claustrum is a tiny sheet of gray matter suspended between thalamus and cortex. However, it receives information from essentially the entire cortex: 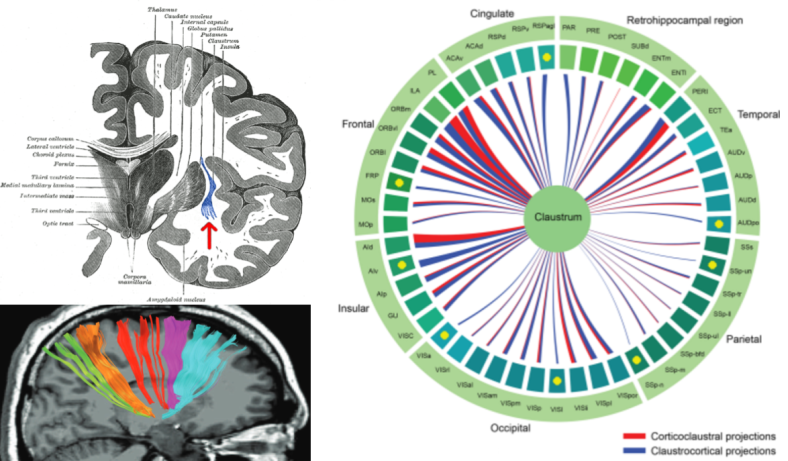 Given that the purpose of consciousness is to integrate cortical information, the anatomical position of the claustrum is suggestive.

Recent anatomical evidence has only strengthened the case for claustrum promoting consciousness:

These data are suggestive. However, it will be some time before we know enough to integrate claustrum function within the ERTAS system.