If we have a vector

and a line determined by vector

, how do we find the point on the line that is closest to

is at the intersection formed by a line through

that is orthogonal to

as an approximation to

, then the length of

is the error of that approximation.

This formula captures projection onto a vector. But what if you want to project to a higher dimensional surface?

Imagine a plane, whose basis vectors are

. This plane can be described with a matrix, by mapping the basis vectors onto its column space:

Suppose we want to project vector

onto this plane. We can use the same orthogonality principle as before:

are self-transpositions. We have shown that such matrices are square symmetric, and thereby contain positive, real eigenvalues.

We shall assume that the columns of

are independent, and it thereby is invertible. The inverse thereby allows us to solve for

Since matrices are linear transformations (functions that operate on vectors), it is natural to express the problem in terms of a projection matrix

, that accepts a vector

, and outputs the approximating vector

By combining these two formula, we solve for

Thus, we have two perspectives on the same underlying formula: 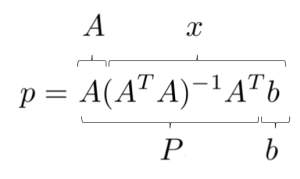 We have previously noted that machine learning attempts to approximate the shape of the data. Prediction functions include classification (discrete output) and regression (continuous output).

Consider an example with three data points. Can we predict the price of the next item, given its size?

For these data, a linear regression function will take the following form:

We can thus interpret linear regression as an attempt to solve

In this example, we have more data than parameters (3 vs 2). In real-world problems, it is an extremely common predicament. It yields matrices with may more equations than unknowns. This means that

has no solution (unless all data happen to fall on a straight line).

If exact solutions are impossible, we can still hope for an approximating solution. Perhaps we can find a vector p that best approximates b. More formally, we desire some

such that the error

Since projection is a form of approximation, we can use a projection matrix to construct our linear prediction function

The solution is to make the error

as small as possible. Since

can never leave the column space, choose the closest point to

in that subspace. This point is the projection

. Then the error vector

To repeat, the best combination

is the projection of b onto the column space. The error is perpendicular to that subspace. Therefore

is in the left nullspace:

We can use Guass-Jordan Elimination to compute the inversion:

A useful intermediate quantity is as follows:

We are now able to compute the parameters of our model,

These parameters generate a predictive function with the following structure:

These values correspond with the line that best fits our original data!